Posted on January 23, 2011 by 16incheswestofpeoria

When I was a full-time bicycle mechanic, I didn’t necessarily look up to professional bicycle racers as the best representatives of the sport.

Greg LeMond, after all, was Greg LeMond, a guy who took his prodigious talent to France to ride with mentor and frenemy Bernard Hinault, win the Tour de France, bounce back from a hunting accident and, let’s face it, make a lot more money than he could safely carry in the back pockets of his jersey, at least not without ditching a banana or two.

If we admire people because they represent the ultimate potential we see within ourselves, I couldn’t be bothered with LeMond. After all, with a single Cat 4 victory to my name as an old man of 26, I was not destined to wear the polka dot jersey crossing the Col du Tourmalet.

Plus, I knew that the gods, whether Greek, Roman or Nevadian, were older than I was. This punk was a year younger.

No, the people I looked up to were the frame builders. Maybe it was because I thought I might someday become a frame builder myself. 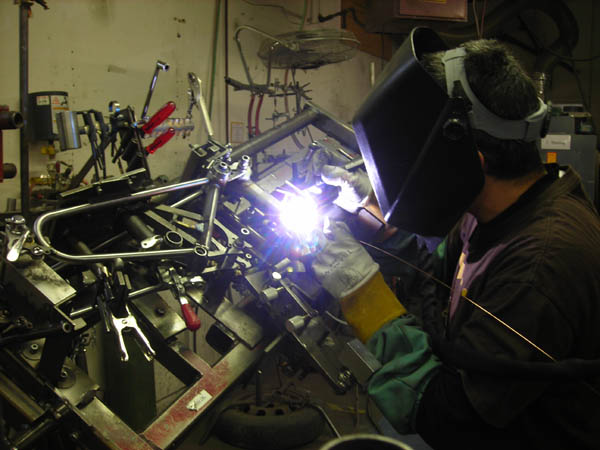 After all, spend enough time as a mechanic and you’ve done everything there is to do to a bicycle except connect seat tube to bottom bracket. (Well, that, and ride a bike under a semi because it was blocking Route 24 west of Washington, Illinois. Which I most assuredly did not do if you weren’t there to see it.)

Or maybe it was because I knew how easily a couple of hundred dollars worth of steel tubing could either become a precision masterwork or the latest twisted addition to the practice/recycling/trash pile.

It’s certainly not an original observation to point out that most people who braze, weld or otherwise join steel tubes into a bicycle frame could make more money as plumbers. I guess that’s what I found most admirable about them: they pursued their craft despite potential (or actual) penury. But what do I know—maybe they thought it was insane to allow water to run inside a perfectly good tube.

To me, frame builders were the total package. They turned tubing into transportation, dreams into reality, years of experience into occasional cash. They also made the platform from which I derived my own income and used to transport myself across town, county and state.

In other words, they played with fire. They still do.

2 Responses to Becoming a bicycle, part 2