Posted on March 6, 2011 by 16incheswestofpeoria 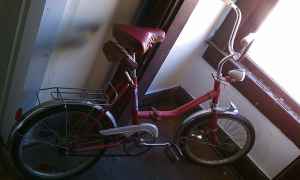 In February, Craig the Architect alerted me to the heroic presence of a Russian folding bicycle within the Indianapolis gulag. An MMB3 for sale for $165 (or 4,723.57 rubles in early March).

Now, thanks to Angela, a highly placed operative within the MMB3 sales pipeline, I can share the following information concerning the bike.

1) It came from Craigslist. “The previous owner was an photograpy student in Muncie who was moving to Texas. At the time a friend was restoring a Raleigh [folder], so we drove there, picked up the [MMB3], then spent the day searching out bikes and bike parts.”

So there was intent…

2) The bicycle has not been folded or ridden since the Craigslist buy. “The other folder I had for running quick errands sufficed in a pinch, but that one wasn’t really sized properly for me, either. Can’t give an educated critique about how [the MMB3] rode or much about it in general, other than another friend remembers riding one like it when he spent summers with his grandparents.”

and a shadowy connection…

3) This sale attempt is a capitalist plot. “In all seriousness divesting my vintage collection is a first step, of sorts, to raising capital. My goal is to get an urban garden started in the neighborhood where I grew up. Ultimately I’m hoping it will develop into an even greater neighborhood resource. If it involved or promoted bikes and cycling in some manner that would be even better! So far the conversations have been very encouraging!”

As far as I know, the MMB3 is still for sale. And just in case you think the bicycling world is being abandoned for a beet field, Angela’s note ended this way: “Would love to try out a properly sized Boston by Montague or a vintage full-size infantry folder, if you’ve got any leads!”

Former bicycle mechanic, current peruser of books, feeder of birds.
View all posts by 16incheswestofpeoria →
This entry was posted in Other bicycles and tagged folding bicycle, Indianapolis, MMB3, Russian. Bookmark the permalink.