In white, it must be rideable: Bike Friday tikit

Posted on January 1, 2013 by 16incheswestofpeoria

Bike Friday’s recall on the tikit stem, what I call a folding riser, temporarily sidelined the entire 2007 to 2012 tikit production run. But with a warranty riser in place (which includes the portion of the frame in white, above), my personal tikit is now safely back on the road.

One thing I learned during the recall was that a tikit is a fairly unusual animal. In five years, Bike Friday has built 3,800 of them, ranging in price from $900 to $5,000. (In comparison, another folding bike company, Tern Bicycles, planned to produce 100,000 machines in 2012 alone.)

My bike is one of the more modestly priced tikits. I spent a little extra for the heavy-rider frame (don’t ask), and spec’d Civia Colfax handlebars with Ergon grips, but that was about it. 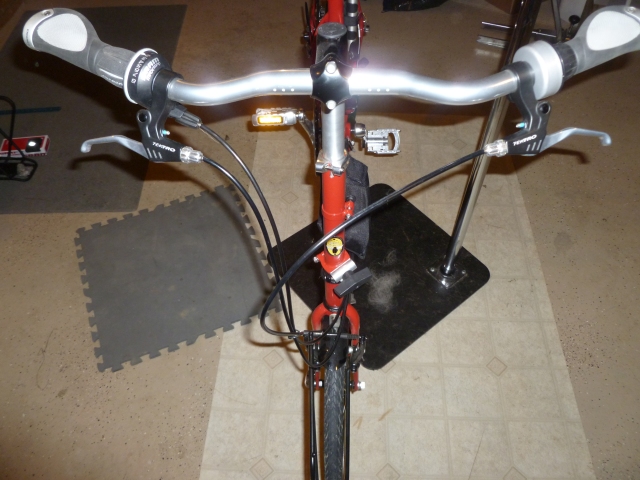 This is what the bicycle looked like before I disassembled the front end. The frame is all red. Note the Grip Shift on the left side of the picture and the rotary bell on the right. 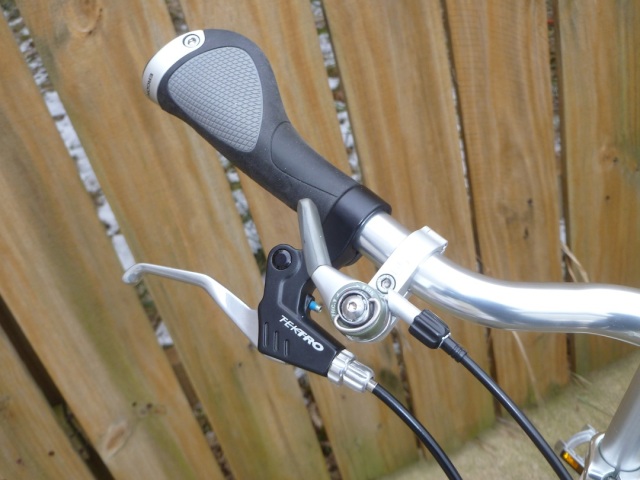 I used this opportunity to get rid of the Grip Shift and the original bell. In their places, I mounted a Shimano eight-speed bar-end shifter on a Paul’s Thumbie (shown, above) and, on the other end of the bar, a more traditional above-bar bell with a thumb-operated striker. These changes allowed me to install full-width Ergon grips instead of the original shorties.

On the left, the original riser in red. At this point I hadn’t transferred the head badge to the replacement. I could have asked for a red replacement part, but I thought I’d mix it up a bit so I could accurately date my photographs of the bike.

What I call the riser is also the fork steerer column (the unfinished section of tubing, above). It’s secured to the lower fork (on left) by the two bolts behind the fork “crown.” Another bolt fits into the trumpet-shaped fitting in front of the crown. That bolt indexes with a slot (originally, a hole) in the steerer to ensure proper alignment of the steerer and the fork blades. Note the white tape left behind after I removed the head badge using a hair dryer (a tool that I haven’t otherwise used in years). 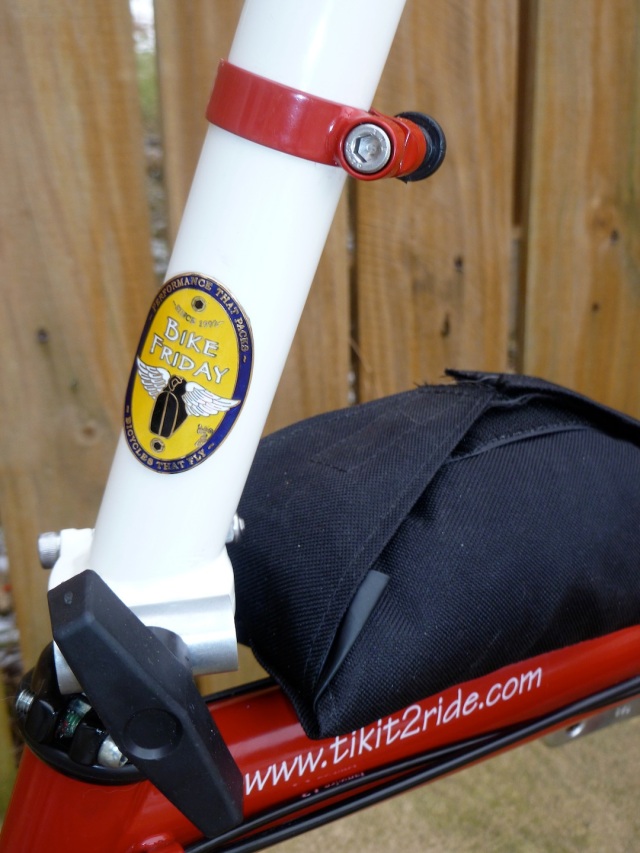 And there’s the new stem, or riser, in place. I used 3M emblem tape to reattach the head badge. Unscrew that black knob in front, and the handlebars fold down. (I have an Impulse-fold tikit; the more sophisticated Hyperfold-style tikit dispenses with the knob in favor of a cable system that releases the handlebars when the back of the saddle is tapped forward.) A nylon nut on the red bracket assembly indexes with a slotted, frame-mounted holder when the bars are folded. The bag behind the riser is an optional frame-mounted Quick Transit Cover that, once deployed, conceals the folded bicycle.

Interested in the repair process? Here are the instructions on stem replacement from Bike Friday. These are the steps a mechanic will follow to get your tikit healthy again.

If you have a tikit and haven’t replaced your stem (riser) yet, contact Bike Friday for a warranty replacement immediately. There’s absolutely no need to take a chance with your safety.

And if you’re considering the purchase of a new tikit, I heartily recommend upgrading to a Chris King headset from the start. Having taken the standard DiaTech headset apart and reinstalled it, I think we can all do better in terms of bearing quality.

7 Responses to In white, it must be rideable: Bike Friday tikit