Two wheels through time: Lynda and the Luthy tandem

Posted on April 3, 2013 by 16incheswestofpeoria

Civilizations produce artifacts, and each artifact results from a process. Artifacts can be clay pots or arrow heads, Citroëns with hydropneumatic suspensions or minie balls flattened by impact. It doesn’t really matter. The surviving artifact is the totem of a process that cannot be retrieved nor, indeed, fully documented.

In the case of the clay pot, someone dug the raw material out of the ground, shaped it by hand or wheel and fired it. After the item entered time to emerge later as artifact, the local process that created it either disappeared or evolved.

Evolution is not limited to the technology of the process. Even if the technology doesn’t change, execution of the process is handed off to the next generation. The illiterate become literate. The poor become rich (and poor again). The artistic woman of an ancient central European village becomes the veteran who can’t forget how he survived the U.S. Civil War.

Over time, such details–names and faces, successes and failures–fall away. We recreate the artifact’s history by starting with the end product and inferring much of its creation and subsequent existence.

The younger the item, the less mysterious it and its process seem to be. We believe the environment, culture and processes of 5, 50 and 100 years ago are relatively well documented, especially compared to, say, the early maritime world that gave rise to the Antikythera mechanism.

We believe we understand younger artifacts because they are similar to items in our own households. And yet bits and pieces of history fall away from them almost as quickly as they are accreted.

Take this Luthy tandem from the late 1890s. We know its approximate age because Luthy quit making bikes around the turn of the century (like so many bicycle manufacturers of the time) and because with its air-filled tires it looks almost modern, especially compared to the bicycles of just a decade before that sported the same solid rubber tires used on high-wheeled machines.

We know the tubing was joined by brazing because that was the only way to join steel tubing at the time, aside, that is, from mechanical clamping mechanisms. We know the joints were nickeled. 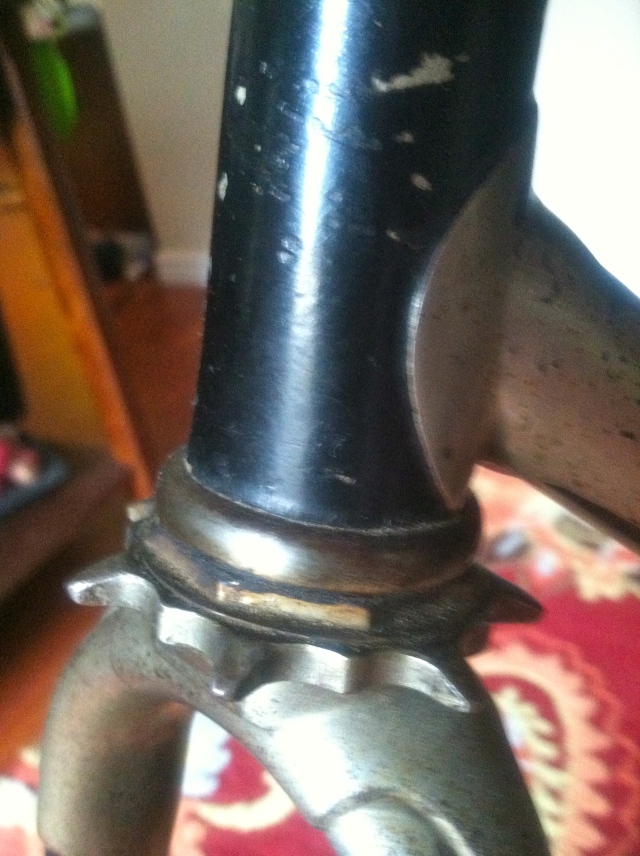 We know that the front seat of this bicycle was meant for a lady and that the gentleman behind her was supposed to help her steer the machine because his handlebars were once linked to the top of the front fork. This is the frame configuration behind the song “Daisy Bell.” As a less-well-known chorus of the song states: “You’ll take the lead on each trip we take/Then if I don’t do well/I will permit you to use the brake/beautiful Daisy Bell.”

We know the bike was made in Peoria, Illinois, because of the head badge and perhaps because of the double-curved cranks, which are quite different from the single-curve cranks of an F.F. Ide bicycle, which was also manufactured in Peoria. 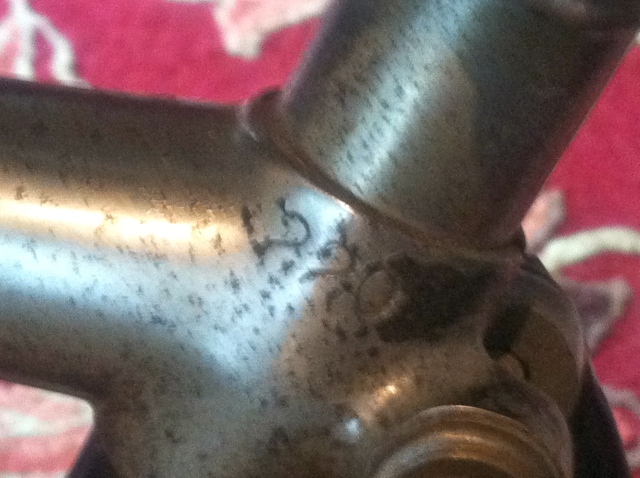 We can make measurements of this tandem and add to our collective knowledge: it has a 67-inch wheelbase, the front seat tube is 20-inches tall and the back is 22 inches.

But consider what we don’t know: the names of the brazer who assembled the frame and the wheel builder who turned wire and wood into twin structures that could withstand the combined pedaling forces of two people; the day the tandem was made—whether it emerged from the factory under a blazing summer sun or a winter snowstorm; where it was shipped; how long it sat on the sales floor before someone with money and a partner took it for its first ride; the names of those first riders; whether either cyclist survived the Great Influenza Epidemic of 1918 or, indeed, made it out of the 19th century alive; whether the machine was a valuable prize handed down to a lucky family member or, after time, simply got in the way of people who had moved onto other things.

Are these items important? Not in the physical sense. The tandem has survived the passage of time, including World War II scrap drives. We don’t know whether its first riders were in love or stayed in love, but that ignorance doesn’t make the bike weigh any more or less, nor does it diminish its graceful beauty.

However, we do like our stories. Artifacts that retain their biographies—the watch that Lincoln wore, boats drawn by Nathanael Herreshoff, Mark Twain’s house in Hartford, Connecticut—have a strong claim to the past in our minds.

So here’s a bit of the known history of the Luthy tandem, which belongs to a lady named Lynda who lives in Salt Lake City, Utah.

She bought the bicycle about 22 years ago in San Francisco from a man who bought it 10 years before that at an auction held by Nordstrom, the department store folks. Here’s Lynda: “Back in the day Nordstrom would use antiques in their stores for displays. Apparently they decided to modernize their stores, and they sold off most or all of the antiques and rugs. 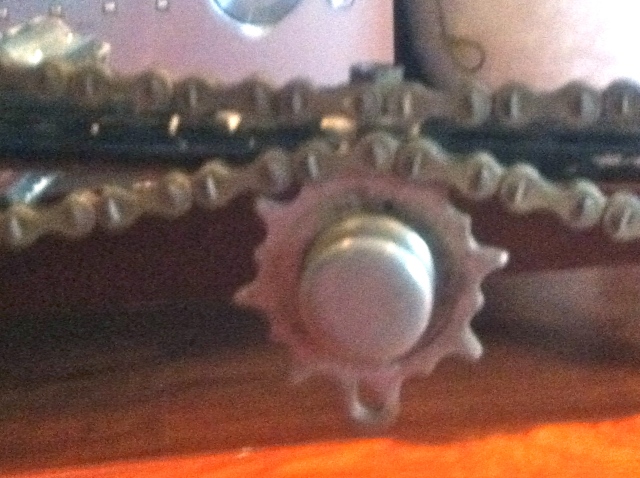 “A friend of mine told me about it, and the rest is history. It’s beautiful! I bought it because I fell in LOVE with it, but I have had a hard time finding much history on it. I contacted the Peoria Historical Society, and they informed me that Luthy and Co. was founded in 1887 and incorporated in 1894. They made farm machinery and binder twine and sold buggies and bicycles. They made bicycles from roughly 1895-1900. They were located at 606-608 S. Washington St. in Peoria.

“I have an antique basket I hang on a little “S” hook on the handlebars, and I have some antique books I put in the basket. I LOVE antiques.”

Some of the bike’s most recent history is visible in one photograph where the front forks appear to be almost disconnected from the hub.

“Recently someone tried to break into my home, and something happened, and the bike was lying down on the rug. The bike display piece got broken in the front. Scary for me, yet fixable for the bicycle. My brother is here and said he could fix it no problem. The police officers said they were probably gunning for the Samsung TV.”

Lynda was at home at the time (and unhurt), but maybe not too much longer.

She lives alone, “and my home is too large. Long story short, I’m planning to purchase a condo, so I doubt I would have the room to take this precious piece with me. I’m not positive though. My mom said, ‘You love that bicycle so much and have quite the attachment–you can’t let it go.’”

For a time, Lynda thought her son might become the bike’s next caretaker, but the history of the tandem from Peoria now seems likely to continue in the hands of an unrelated owner.

From her most recent email: “Unfortunately I am going to have to sell this great piece that I have grown quite fond of. My son is in Chicago in medical school and who knows in six years where he and his little family will be.”

From the editor: Thank you for all the pictures and the story of the Luthy tandem, Lynda. Best wishes to you and your family.

Note: Lynda contacted cycling author, historian and collector Jim Langley for any insights about the tandem that he might be able to offer. Jim is a longtime Bicycling magazine and roadbikerider.com contributor. His personal website, jimlangley.net, is full of good reading, and complemented by the “repair help, classic bike info, buying tips [and] bike news & views” at his blog, jimlangley.blogspot.com. He graciously allowed me to reprint a portion of his comments to Lynda for this article.

“When your bike was made there […] was a huge competition among bike companies to have something that made their bicycles stand out, and those curvy crankarms are likely what Luthy used to set that tandem apart.

“I haven’t seen too many bicycles with curvy crankarms like that so that’s a rare feature, and something that makes your bicycle even more special. It’s also a great distinguishing characteristic that will make it easier to spot your bike and identify it in old ads or catalogs.

“Sometimes when a bike has unique details like this, it’s because it was made for someone famous. And since this is a tandem, it might even have been a famous couple. All the famous people in the 1890s had to have bicycles because they showed you were cool and had status. So, it’s possible that some wealthy couple ordered this tandem, and Luthy made it special for them—to their specifications.”

1 Response to Two wheels through time: Lynda and the Luthy tandem