Posted on October 17, 2013 by 16incheswestofpeoria 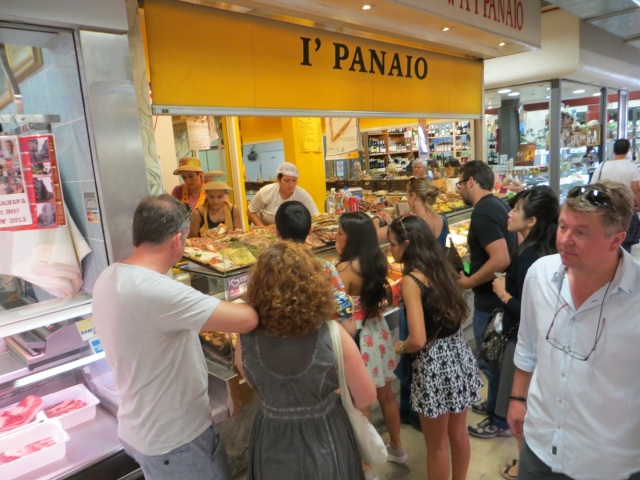 The San Lorenzo Mercato Centrale is a big building in Florence, Italy, full of small vendors selling food of all kinds, including fruit, vegetables, baked goods, olive oil and meat. 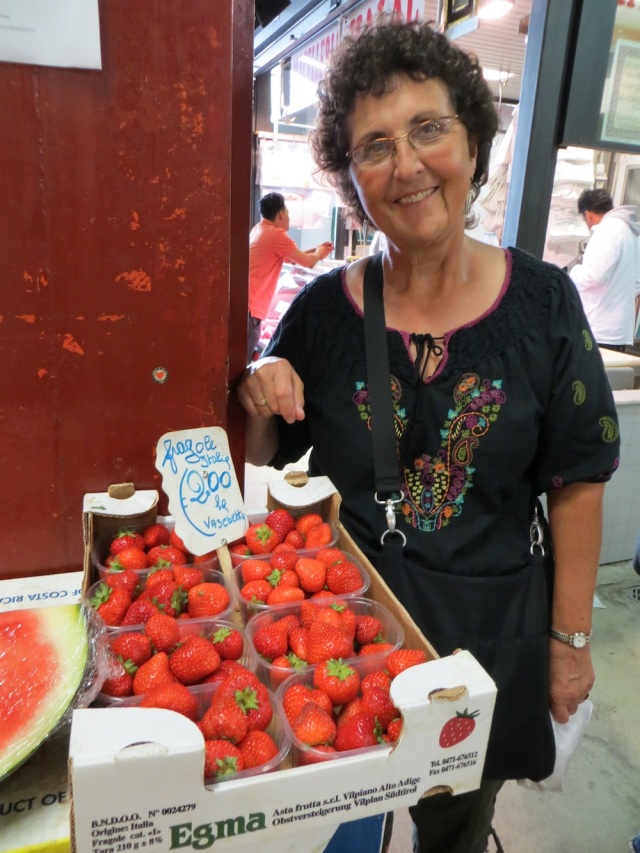 I suspect supermarkets in outlying areas have drained some business from the Mercato over the years, but it still seems to attract a good amount of foot traffic in the old city, including that generated by people interested in knowing the origin of their food. The Slow Food movement, after all, began in Italy. 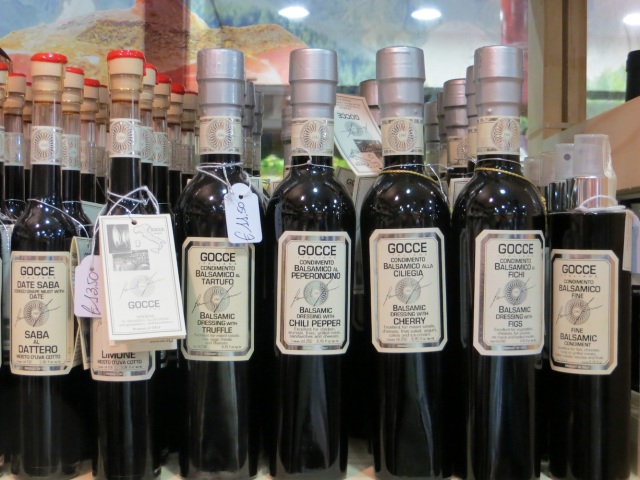 It’s true that you will see every part of the cow here, not just the long-established cuts of meat that appear on the dotted-line maps in the States. Depending on your point of view, either nothing goes to waste or nothing is ever identified as waste. 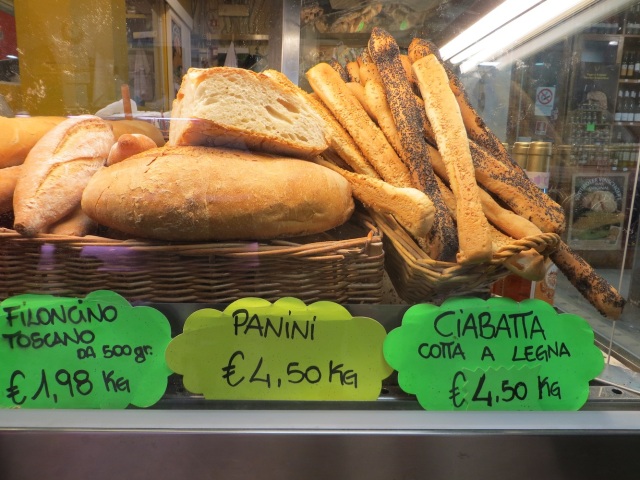 If I were to persuade someone to become a vegetarian, I could think of no better classroom than the Mercato Centrale’s generously stocked meat displays. Likewise, if I were entertaining a carnivore, the displays would be mandatory. They are the match before the fire, the beast before the bun. (And the buns are just a few feet away.) 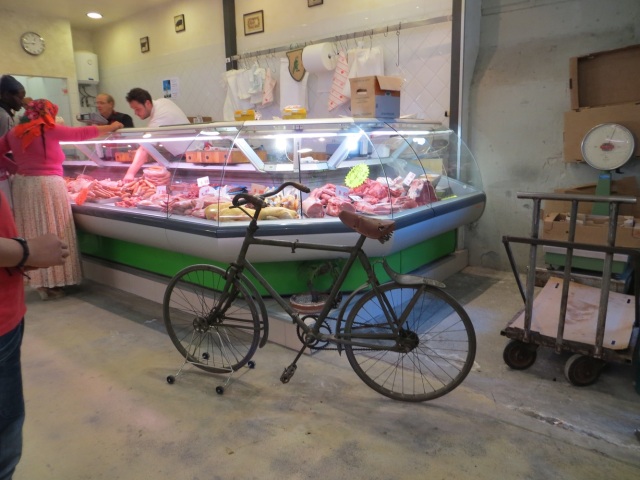 I wandered the Mercato’s aisles one day during the latter half of September 2013, more interested in bananas than brisket. Yet I ended up spending most of my time in front of a butcher’s case, studying a bicycle parked there that I had seen in books but not in person, a World War 1-era military folder designed for the Bersaglieri, Italy’s light infantry troops. 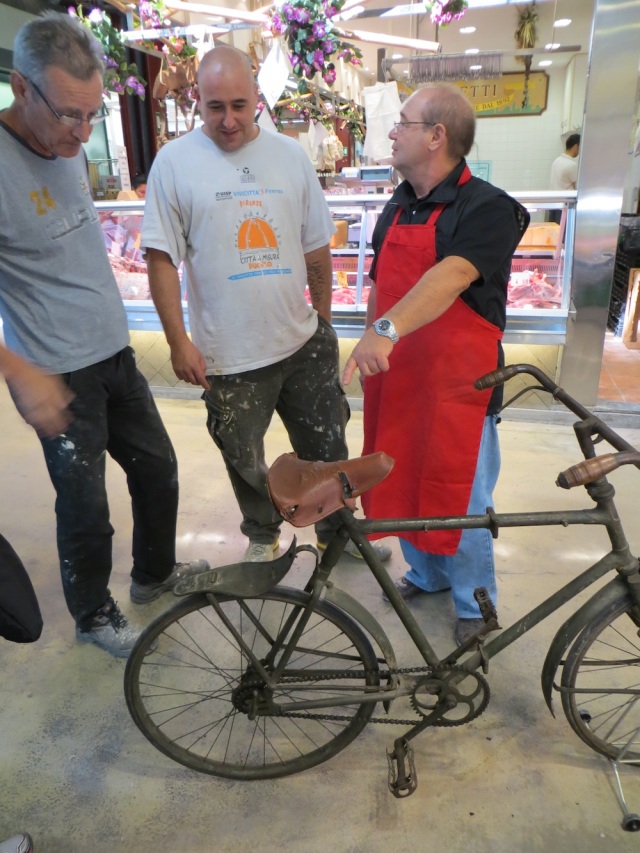 I began taking pictures immediately, which attracted the attention of the butcher. He told me all about the bicycle, in Italian. I responded in English. We both pointed at the bike a lot. And I learned a lot. 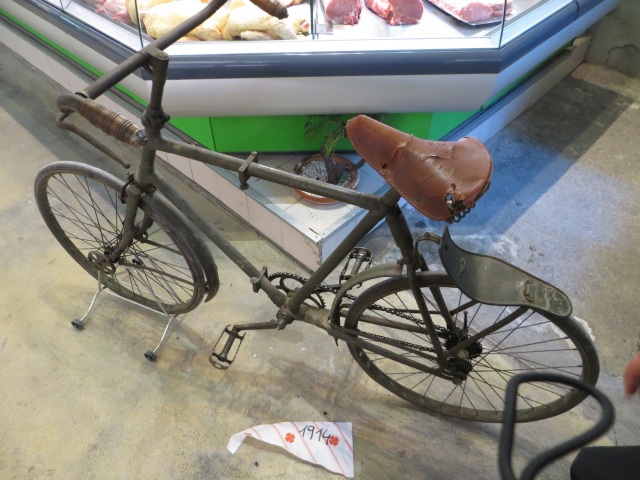 First, the Italian bicycle is heavy–heavier than my 1964 Schwinn Corvette that hits the scales at about 42 pounds–and it was built to last with minimal maintenance. The only part replaced since the Giolittian era seems to be the saddle. 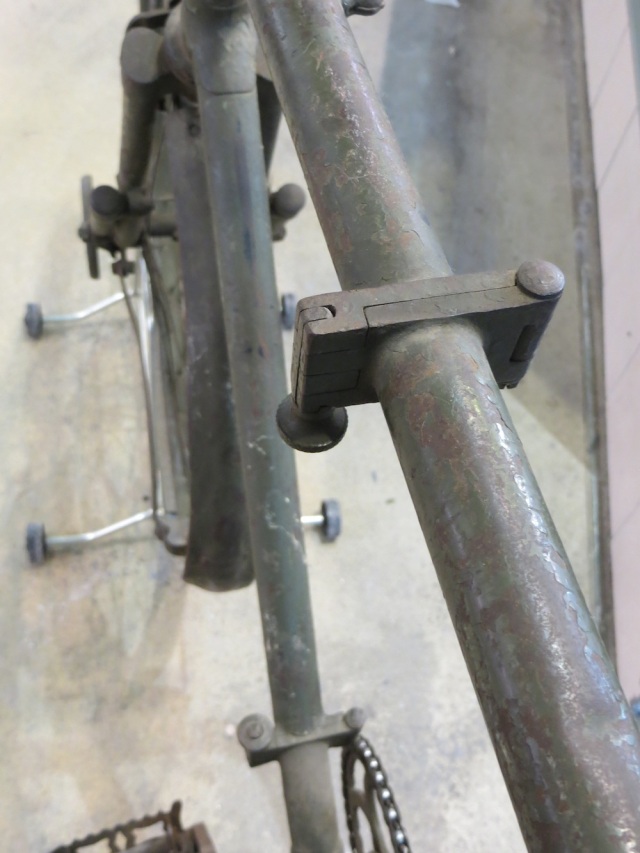 Imagine someone folding this machine in half and carrying it backpack style over rough terrain–along with rifle, ammunition and whatever else needed for offense, defense, sustenance and consolation. 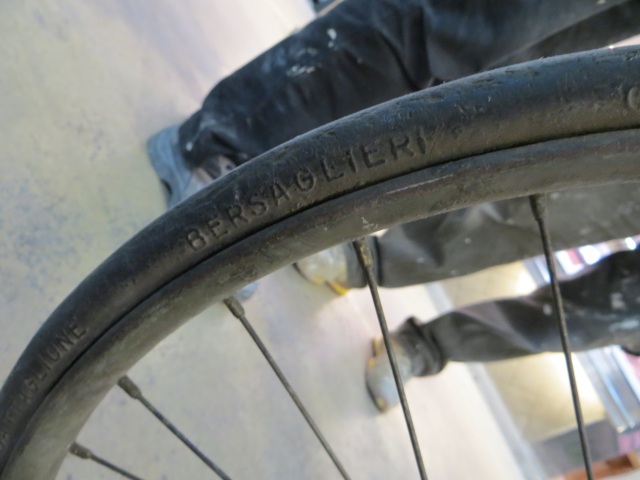 The tires are solid: no air inside, eliminating flat tires when on patrol. They sport the words “Pirelli” and “Bersaglieri” in raised letters, and they’re in outstanding condition, unlike any of my own tires from the early 1980s that cracked and dried out long before Sting left the Police. 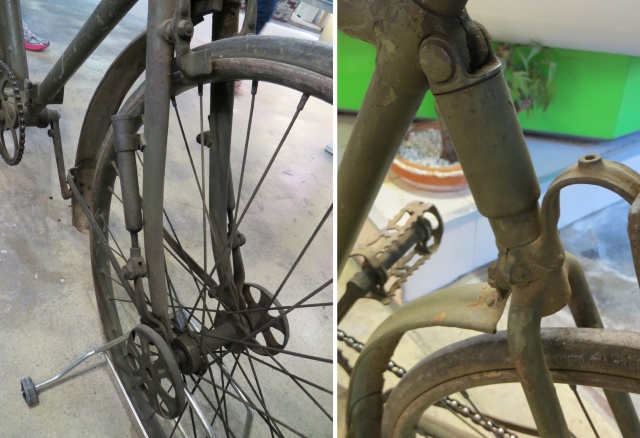 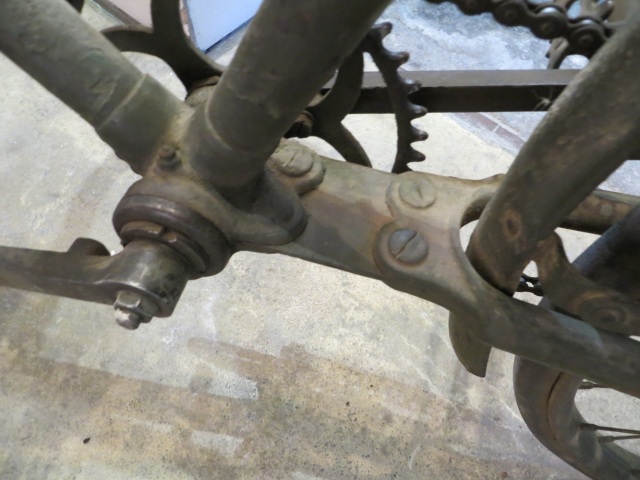 Front and rear suspension may make up for the tires’ lack of give. The bike sports two springs on either side of the fork and a larger single spring within the monostay behind the seat cluster. A flat-plate bolted to the chainstays provides the flex necessary for the rear spring to work. 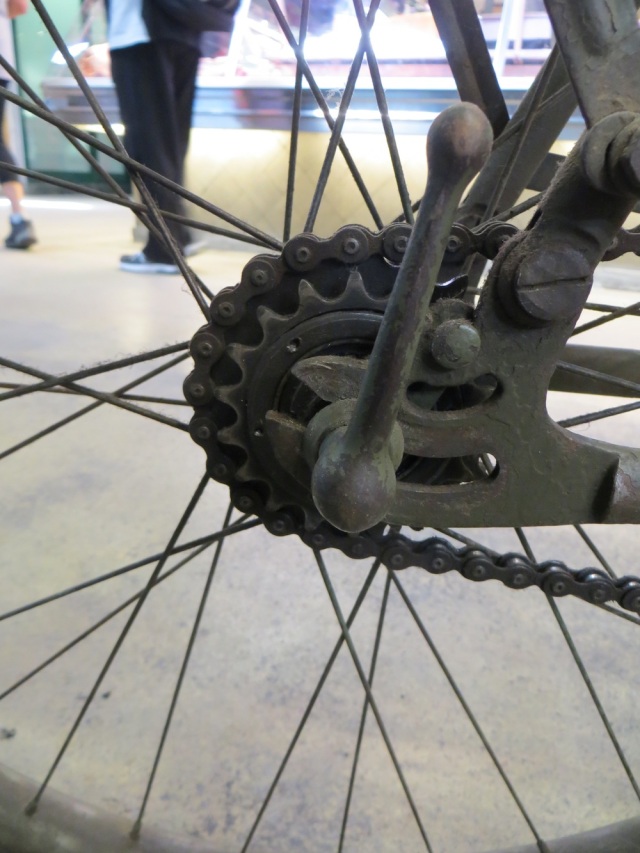 This is a fixed-gear machine. If the wheels are rolling, the crank is turning. No freewheel with troublesome pawls and springs here. The rider can select one of two gear ranges by loosening the rear hub in the frame, moving the chain by hand from one sprocket to the other and resecuring the hub. No tools necessary. 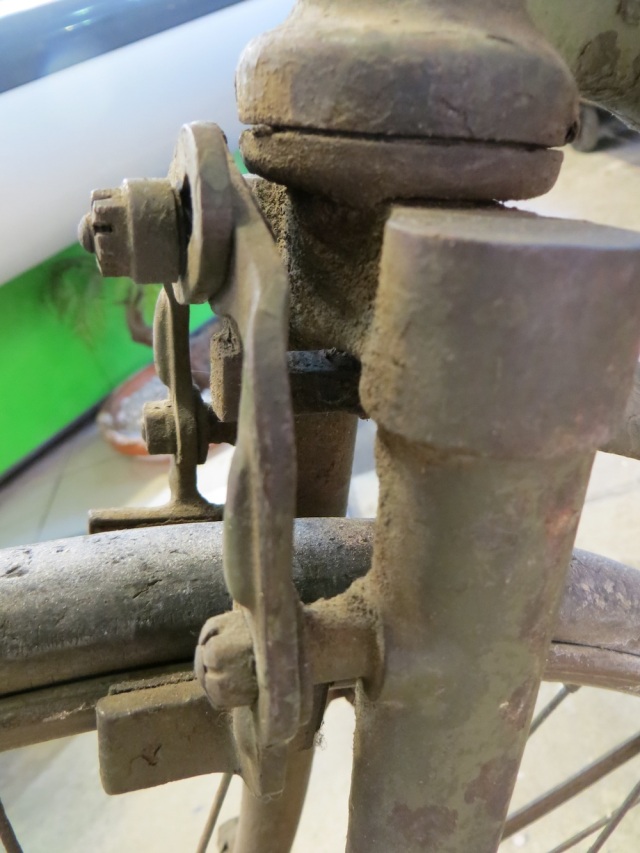 To bring the bike to a stop, the rider slows the ever-turning cranks with his feet and squeezes a hand lever to activate the front caliper, which looks a lot like a modern centerpull. The caliper is even mounted to the fork with braze ons, the same way we’d attach a set of cantilevers or V-brakes. 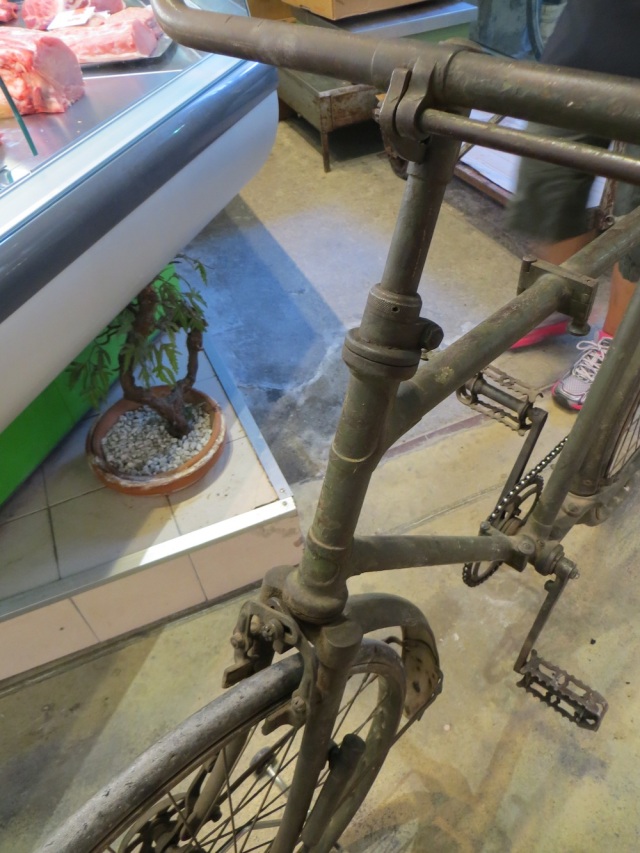 A solid rod transmits force from the hand lever to the caliper. At first I thought the rod was missing, but it’s inside the handlebar stem and emerges from the underside of the fork crown. It’s a very clean design, intended, no doubt, to protect the rod from getting bashed in the field. It also explains why the front fender doesn’t extend forward of the fork blades.

It’s a shame the brake shoes were worn down to the holders: I suspect a fresh set of shoes would provide outstanding control, especially if compared to the elegantly ineffective “pull-up” calipers on old 3-speed Raleighs.

So much for the details. My guide continued to make his points in Italian, and I expressed my appreciation in English sprinkled with bella and grazie. Eventually, and I didn’t know how–my companion later credited the man’s universal gestures–I clearly understood him when he asked me whether I wanted to ride his bicycle.

He didn’t have to ask twice. I took a few slow turns around the Mercato, riding scooter style when the number of shoppers warranted greater discretion.

This is a bicycle made for stability on unimproved surfaces–for deflecting rocks, not for darting in and out of the peloton. One of the cranks was a bit loose, so I decided against any interval work, and given the environment surrounding the test ride, I formed no clear impression of the bike’s weight, tires or suspension, though I’m sure the Bersaglieri could only dream of the Mercato’s ultra-smooth concrete. 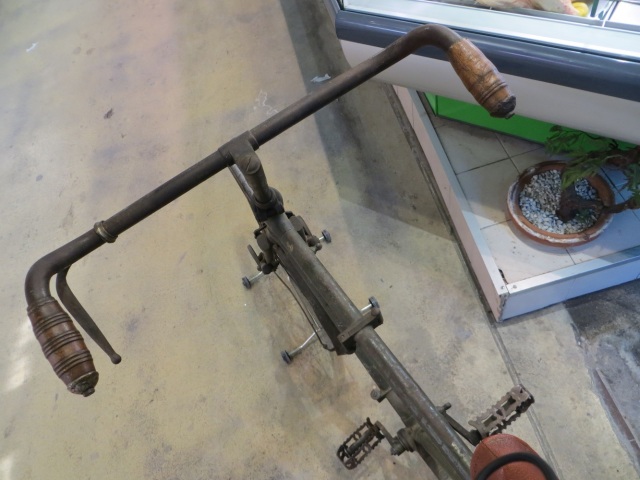 What I did notice, however, was the upright position. My hands rested very lightly on the wooden handlebar grips, with no need for additional cushioning. Outside the Mercato, the bicycle, like any sit-up-and-beg Dutch roadster, might be a challenge in a headwind, but I suspect its other features impose their own speed limits.

I also suspect that back in the day, its rider was more concerned with flying bullets than frontal area. 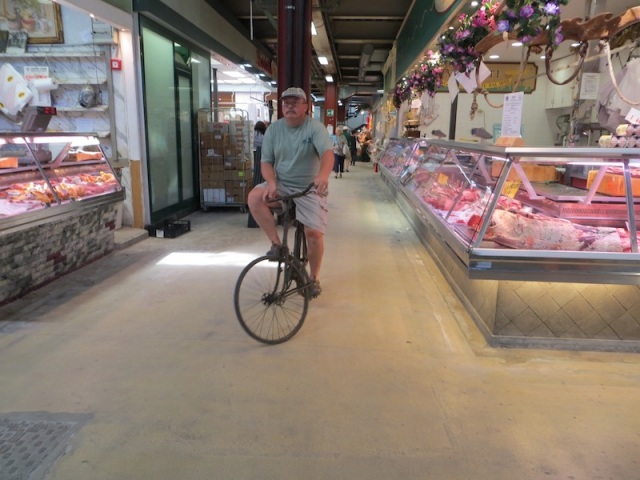 As for me, it was enough to end my first bicycle ride in Italy with a track stand next to the butcher’s case and savor every part of the experience, if not necessarily every part of the cow, while balanced there.