Campagnolo history inside a gelato shop

Posted on October 23, 2013 by 16incheswestofpeoria 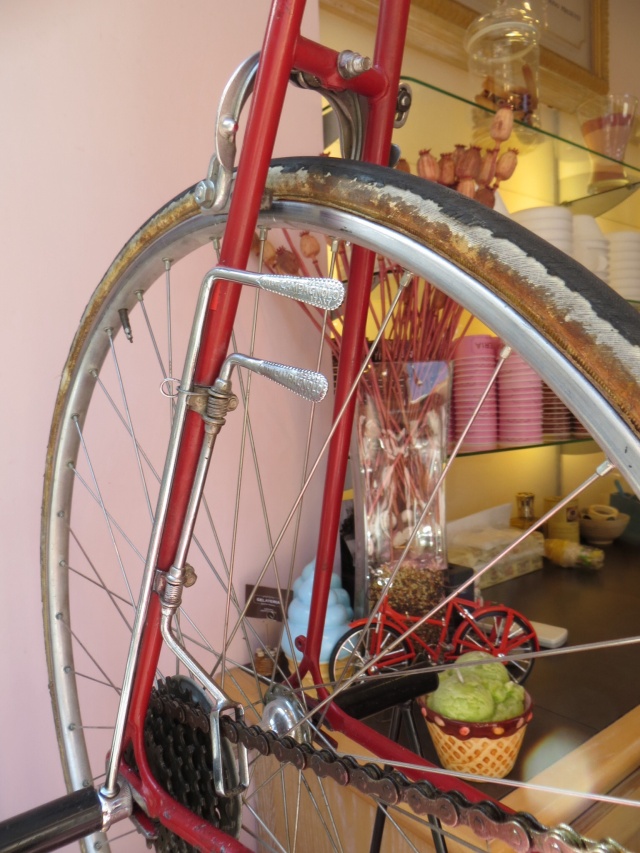 You’re looking at a Campagnolo Cambio Corsa derailleur, most likely from the 1940s. It’s another one of those things that I knew about from books but had never seen in person.

I found it in Florence, Italy, not in a museum, not in a bicycle shop, but in a gelato shop that had decorated in anticipation of the 2013 World Championships.

Because of the sun’s glare on the window, I couldn’t get a clear photograph of the bike outside. Inside, the lady doling out the cioccolato, amarena and pesca had obviously met other history fans with cameras and waved me to the back of the counter so I could take a closer look at one of Campy’s earliest products.

Tullio Campagnolo patented the Cambio Corsa in the 1940s. It’s similiar to a front derailleur in that it’s basically a hunk of steel that slaps the chain sideways.

Unlike all modern rear derailleurs, including the Gran Sport introduced by Campy in 1950, no part of the Cambio Corsa extends below the right-side dropout. That means no spring-loaded jockey wheels to take up the slack as the chain is moved from one cog to another.

Instead, the shifting process involves moving the hub in the dropouts with every gear change–while the bicycle is in motion.

Here’s my understanding of how to shift the Cambio Corsa:

3) You decide it’s worth the time and effort.

4) You reach behind you for the upper lever, which is the rear hub’s quick-release lever, and flip it open. Really. The rear hub is now free to move back and forth within the dropouts. (The ends of the axle of the hub have teeth that engage with teeth on the dropouts to keep the wheel in side-to-side alignment with the frame.)

5) You pedal backward and shift gears using the lower lever. The chain is automatically retensioned. If you shift to a smaller cog, the hub moves toward the rear of the dropout, pulling the chain along for the ride; if you shift to a larger cog, the chain pulls the hub forward.

6) Gear selected, you close the upper lever, which secures the hub within the dropouts, and pedal forward again.

7) If you’re Gino Bartali in 1948, you go on to win the Tour de France. (If you’re Fausto Coppi in 1950, using the short-lived single-lever version, you win Paris-Roubaix.) 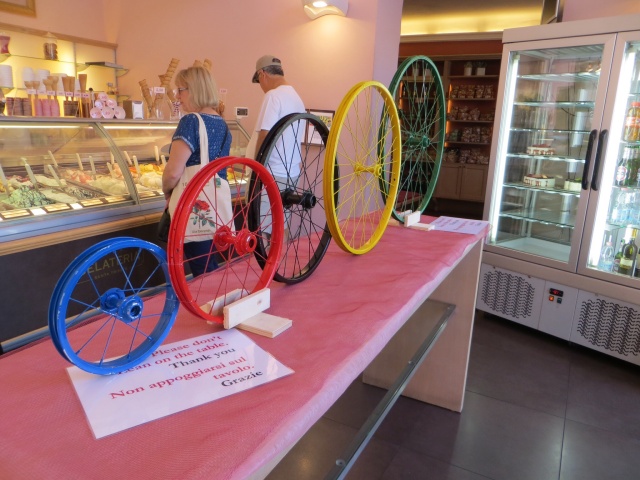 Dave Moulton offers an explanation of the derailleur and pictures of the axle and dropouts that make it possible to ride with a loose rear wheel here. Here’s a short video of a gentleman operating a Cambio Corsa as the bike sits on a stand. Notice the movement of the hub in the dropouts as he shifts gears. And here’s a way-too-brief video of a rider shifting the derailleur on the go. You can see him open the upper lever to release the wheel and push the lower lever toward the wheel to shift to a lower gear.

Former bicycle mechanic, current peruser of books, feeder of birds.
View all posts by 16incheswestofpeoria →
This entry was posted in Equipment, History, Other bicycles, Report from the road and tagged Cambio Corsa, Campagnolo, Campy, derailleur, Florence, Italy. Bookmark the permalink.

3 Responses to Campagnolo history inside a gelato shop