How to ride a bicycle without leaving a trail

Posted on November 5, 2013 by 16incheswestofpeoria 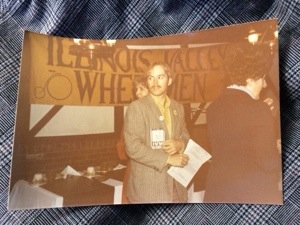 Back in the old Illinois Valley Wheelmen days. Still have the lapel buttons, somewhere. And the moustache in which the crumbs of a thousand monster cookies hid until the sheriff finally rounded them up.

What I don’t have is much more of this sort of memorabilia: physical reminders of days long sunk in the bottomless tar pit of time.

That’s not a bad thing. The past does me a huge favor by pulling its daily disappearing act. Otherwise, I’d be carting more and more of it around.

As it is, I make room for a crocheted baby hat (out of style) and baby shoes (no laces), greeting cards from the early 1960s (unusable because people wrote in them), a wagon (useless without the motive power of the pater familias), and a Royal typewriter (early wireless device without hard drive or monitor).

You’d think I’d have more pictures of bicycles and friends who rode them. I had a Nikon FM, and I assembled and sold two darkrooms–one of which occupied the second, and unused, restroom at the back of Vitesse Cycle Shop when it was in Peoria Heights. (Today it is said–wait, I’m about to say it–that Seven on Prospect, “A Cosmopolitan Grill,” is haunted by the echo of a mechanic swearing at a dual-cable Shimano Positron derailleur.)

Pictures can’t capture what and who they were–or bring them back so they can remind me when I saw that first Huret Multito on Don’s bike as he rode toward me on Highview Road in East Peoria or who else was with Ken and me the day we stopped to warm up in the little house by the railroad tracks in the middle of Tazewell County because we should have had three layers and gloves instead of two and none.

The smoke above the roof that day was an unreliable witness. The details didn’t really fall away because they were rarely given a chance to collect and weigh us down.

And so, for me, without much in the way of records, Motobecane, Guercotti and Peugeot, Mugavero, Eberle and Siegrist have entered into the ancient oral tradition.

Would that I had the memory of Homer to recount all the rides and events of our past.

But perhaps it’s better to remember a little and ride more.