Posted on December 8, 2013 by 16incheswestofpeoria

At 17,223, Los Angeles has the fourth largest population of bicycle commuters in the United States, trailing only New York (36,496), Chicago (19,147) and Portland, Oregon (18,912). Interesting report. Who knew 6 percent of all commuters in Gainesville, Florida, arrived by bicycle? (League of American Bicyclists)

Moulton, maker of fully suspended small-wheeled bicycles, will create a special machine exclusively for the Chinese market. It’s a deal worth £500,000 to the British manufacturer. (Wiltshire Times)

Scroll to the bottom video on this linked page for some glimpses of manufacturing inside Moulton’s Bradford on Avon facility. (ITV)

The New York City Department of Transportation has gotten a lot of publicity for changes to the city streetscape, including the bike share program, pedestrian plazas and bike lanes. “Making Safer Streets” provides the department’s perspective on the before and after of infrastructure design. “The fundamental characteristic of the successful projects, whether large or small, is that they create the opportunity for all users — drivers, pedestrians, and cyclists — to move through the street network simply and easily, providing clear paths that get them where they want to go, minimizing the unexpected, the confusing, and the potential for surprises.” (New York City DOT)

Users of Citibike, New York’s bicycle sharing program, have racked up more than 10 million miles during 2013, but the number of collisions involving bicycles in the city doesn’t seem to have changed at all. (Fast Company) 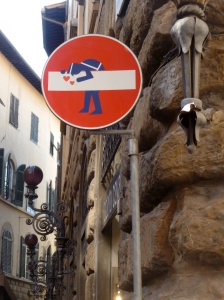 What’s the answer when people drive cars too fast? Philadelphia is using the problem to trigger its own solution. “In an attempt to slow everybody down, the city has installed sensors in the roadway that determine the speed of vehicles approaching Fountain Green, about a half-mile north of the Girard Avenue Bridge. If a vehicle passes the sensor going above the speed limit, the light at Fountain Green turns red.” (Philly.com)

The Path Less Pedaled team revisited Oregon’s Old West Scenic Bikeway back in June, one year after filming the network of rural roads and TravelOregon brought area people together to discuss the bicycle tourism opportunities. Good news: “[N]o one is making money hand over fist and retiring in a year just yet, but cyclists are starting to discover Eastern Oregon, ride their bikes there and contribute to those local economies.” (The Path Less Pedaled)

In general, bicycles are laterally stiff, vertically compliant mechanisms held together with a variety of bolts. But even when bolts are the same size, they’re not necessarily the same grade. Jim O’Clair provides an introduction. (Hemmings)