Bicycles from Turbo Bob. Bridges from the 18th century

Posted on September 16, 2014 by 16incheswestofpeoria 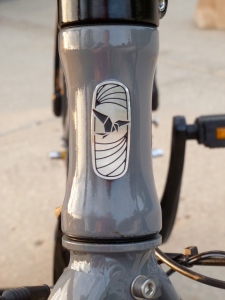 Couldn’t make it to Interbike? Check out YouTube. Turbo Bob has video of the Tern booth, the Dahon booth (where he was told to stop shooting) and the Montague booth. Trends moving through the non-folding world are also evident in the folding bicycle space, including disc brakes, belt drives and electric-assist motors. (YouTube)

Local rider Mike Honnold is pretty happy with the Fly6 tail light, which incorporates a camera to record everything that happens behind the bicycle. A lot of his YouTube videos feature his son in a trailer, but the most memorable footage may just be “Tim’s Epic Crash on the Rock Island Greenway.” At Interbike 2014, Outside magazine named the Fly6 as one of its Gear of the Show winners. (Outside)

How do you park your bicycle at home? Leaning against a wall? Kickstand? From a hook? How about flat against the ceiling? Check out that last option in a video from an Italian manufacturer (flat-bike-lift)

Oregon Manifest is “a nonprofit organization that values the process of making, the spirit of ingenuity, and the passion of brave undertakings.” One of the group’s recent activities was The Bike Design Project, in which Oregon Manifest “partnered high-level design firms with American bicycle craftsmen to collaboratively develop the next-wave urban bike.”

-With all the votes in, Teague x Sizemore Bicycle won with the Denny, a bicycle with handlebars that double as a lock and fenders that are less like Honjos and more like the old tire wipers that flick debris off before it punctures the casing.

-Even if you’re skeptical of bicycle design contests, this one and this bike are worth paying attention to for one reason: Fuji says it’s going to take the Denny into production. Thanks for the link, Marlon. (Oregon Manifest)

Interested in recreational multimodal travel? “For $3, Bike Aboard! allows cyclists to bike one way on the Ohio & Erie Canal towpath and take the train in the other direction.” (Washington Post, via The Columbus Dispatch)

Here’s a view of Portland, Oregon, from a St. Louis cargo bike enthusiast. Short version? Pick up a Portland Citywide Bike Map, enjoy the bike boulevards and don’t be surprised by some poor infrastructure design choices along the way. (Her Green Life)

In the United States, the 2013 National Bridge Inventory includes just two functional bridges from the 18th century. They’re both in New Jersey. (WNYC)