What can you learn from Shimano? Ask Bushwhacker’s Robert Woo

Shimano TEC classroom work focuses on the newest technology. But when you get back home, you still have to build the next bicycle in line.

When Shimano let Robert Woo loose on its 11-speed Di2 electronic system, the Bushwhacker mechanic from Peoria, Illinois, connected the front and rear derailleurs of the bike on his stand to eight shifters. And the derailleurs worked as though Shimano had purposely designed the drivetrain for a bicycle-bound Vishvarupa.

Woo recently spent two days in the company’s Irvine, California, facility, studying Shimano’s latest technology as part of the Shimano TEC (Technical Education and Certification) program. While many mechanics are familiar with the web-based component of the program, you have to complete a number of web modules to be considered for classroom training, according to Woo.

You don’t just go to Irvine and study the latest products from Shimano with the pros; before you go, you spend hours each week in online training, too.

“It was a lot of fun, but there was a lot of information coming out, too. They wanted to premier the new 11-speed electronic drivetrain, and they wanted us to be familiar with how to set up the mapping. You can do a lot with Di2 that you can’t do with a mechanical system.

“B junctions accommodate your battery, your rear derailleur, your front derailleur and the shifter mounts. You can add several B junctions, so I elected to stack them on and see how many shifters I could put on a bike. It was amazing. Shifters on handlebars, aero bars. I took one of the climber shifters and made a downtube shifter with it.”

Shimano shared some relatively simple ideas, too, like using the right screwdriver for the job. If you use a Phillips on Shimano components, you may notice it has a tendency to cam out of position.

The reason? The Phillips is the wrong screwdriver. What you want is a Japanese Industry Standard (JIS) screwdriver. According to Woo, radio-control and electronic enthusiasts have known about JIS for a long time, but frustrated bike mechanics, unaware of the Japanese standard, tend to upgrade to more expensive Phillips drivers, thinking that will solve the problem.

Chain maintenance? Shimano recommends caution. Clean the outside of the chain, yes, but don’t wash out the grease on the inside. Doing so may accelerate chain wear, even after reapplying lube. By the way, Shimano makes no recommendations on chain lube brands. So, go ahead and use your favorite.

“It was very humbling to meet the other people in the class. A gentleman from Texas made his own Di2 switches from CatEye computer buttons. He was building his own fat bikes with two rims laced together for width. I think some people are doing this sort of stuff simply because they can. They have the technical ability to think about it and the time. 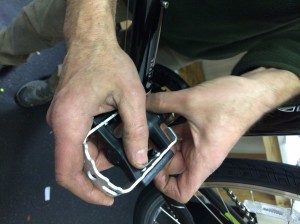 No Di2 in the build schedule today.

“Over the years, you face a lot of new products. Like the new mechanical side-swing XTR front derailleur. The cable doesn’t wrap around the bottom bracket. It runs along the downtube and then straight to the anchor bolt. It’s designed to handle the chain angle that comes with a 42-tooth rear cog, and the cage is replaceable. Pretty neat.

“I’ve got my notebook here with hours of little stuff that I picked up in California. But the training was also an affirmation that we do a lot of things right.”

4 Responses to What can you learn from Shimano? Ask Bushwhacker’s Robert Woo