Filling a hole with money. Or, two-buck luck 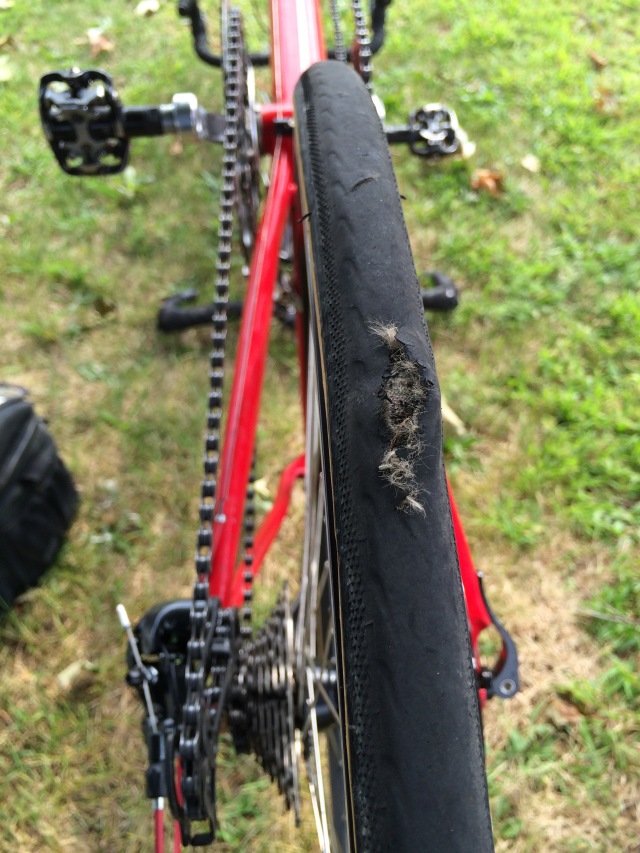 Well, there’s your problem. What IS that? A nine speed?

Here’s what to do when you have a blowout on the back tire of a Co-Motion tandem on West Pine Street between North 3rd and 2nd streets in Chillicothe, Illinois, at 10 a.m. on a Saturday.

I’d write Saturday, August 29, 2015, but I’m going to take a wild guess and assume you have not completed work on your time-travel machine. No problem, these instructions hold for any Saturday, and, who knows, you may be able to go back in time at some future date.

1) Identify the firecracker sound coming from the rear of the machine. Confirm the flat by sensing the rim squirm on the unsupported sidewalls of the tire as you come to a stop.

The second sound you hear almost immediately comes from your stoker; recall her making a similar sound in 2005 on the way back from the Midwest Tandem Rally in Grand Rapids, Michigan, when the Mazda Tribute’s side air bags blew for no good reason as you shut down the engine at a gas station just off I-80.

Almost forgot, you want to be going about seven miles per hour when the tire blows because you just pulled away from a delightful stop at Happy Thought Coffee on North 2nd Street, and now you’re slowing for the railroad crossing.

Pro tip #1: If you’re going to have a blowout, travel at a reasonable speed, not the 36 miles per hour you were doing on Blue Ridge Road an hour and a half before the tire registered its complaint.

Pro tip #2: It would be better if you had the blowout in your basement workshop, which is eight miles away, and even better, if you weren’t riding your Co-Motion tandem at the time, which you wouldn’t, because who would? 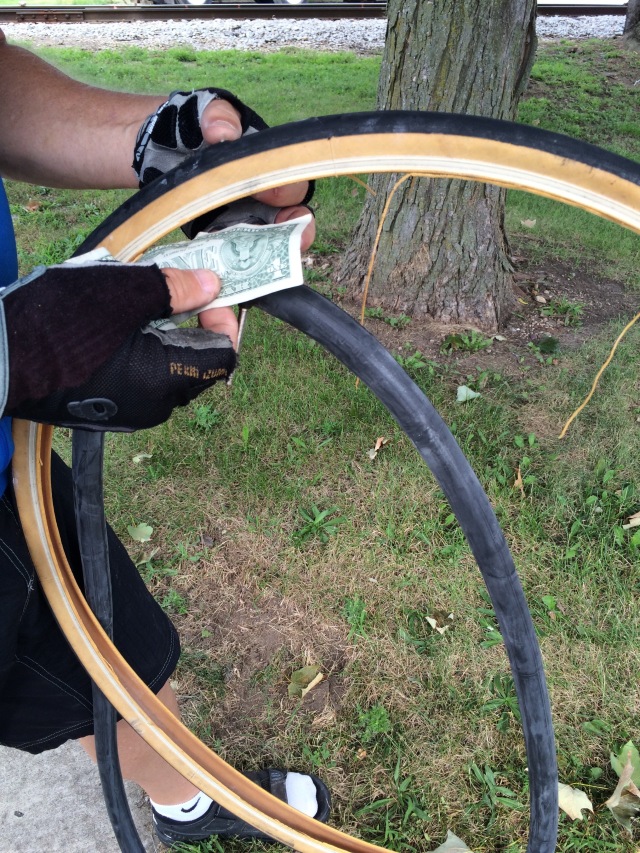 Cartoonist Richard Guindon once drew a man tossing cash at the flat tire of his car. The caption was “Liberal throwing money at a problem.”

2) Listen to your stoker explain that the problem is not the tube but the tube and tire. Be thankful she’s no longer making that sound.

3) Understand your reasoning for continuing to use an obviously bald, and now, obviously flat, tire 300 or 400 miles ago–that you didn’t feel you’d gotten enough miles out of it—is evidence of a misinformed frugality, willful ignorance of cause and effect, a more systemic thought process gone haywire or some causal combination. Don’t spend a lot of time on this; it doesn’t matter. It’s time to Take Action.

4) Turn the tandem upside down. Mourn the gravity of the injury to the tire. Remove the rear wheel.

5) Get grease on your hand from the chain. Ask your stoker for a Wet Ones Sensitive Skin Hand Wipe. Remove grease. (You’ve done this before.)

6) Remove tire and inner tube. Don’t bother inspecting the tube; you won’t be using it again. You’re kind of stuck with the tire, though. Confirm that the casing has a major cut and a minor one. You must take care of both injuries to continue your journey awheel. 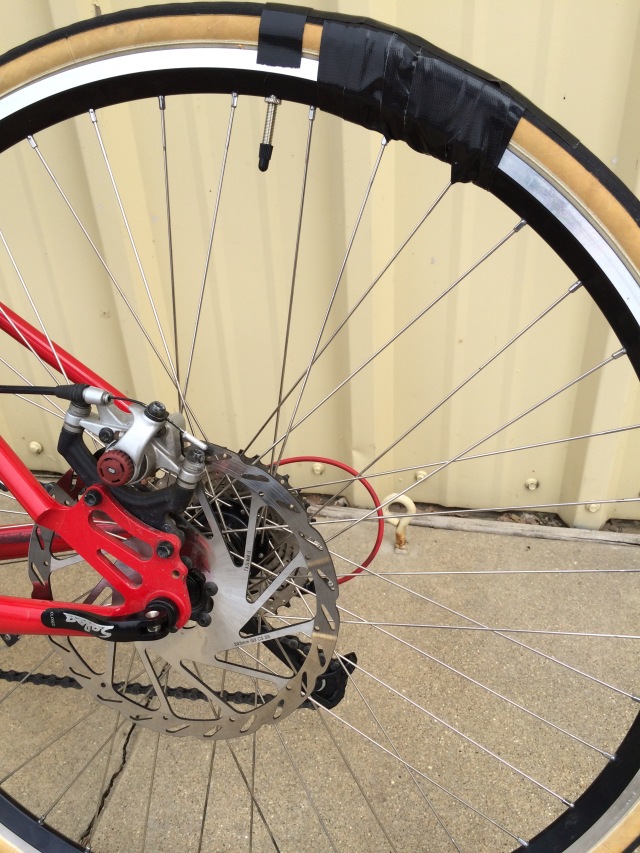 Wondering what all the fuss is about disc brakes these days? Consider the advantage of retaining a brake even when the rim is unavailable as a braking surface.

7) Ask your stoker for money. (You’ve done this before, too. Oh, hell: you’ve done all of this before, but you weren’t riding a tandem; now there’s a witness.) Specifically, ask for two paper bills.

8) Retrieve your spare tube. Position the bills between the inner tube and the inside of the tire, covering both casing cuts.

9) Assemble tire, bills, tube and wheel. Inflate to 65 to 75 psi, not the usual 110 psi. Use the tire gauge that no one carries in situations like this, not even you.

10) Exhibit total confidence in the repair by reinstalling the Presta valve nut and cap. By the way, actual total confidence is not necessary, just its exhibition. How do you do it? Same way Jon Lovitz does it: “Acting!”

Pro tip #3: It’s always a good idea to break down a half block from either a bicycle shop or a hardware store. Plan your blowouts accordingly.

13) Ask stoker to buy electrical tape so you can cover the external wound and prevent the entrance of debris (or even derock). Thank her for reemerging from the store instead with the miracle product that is Gorilla Tape To-Go. 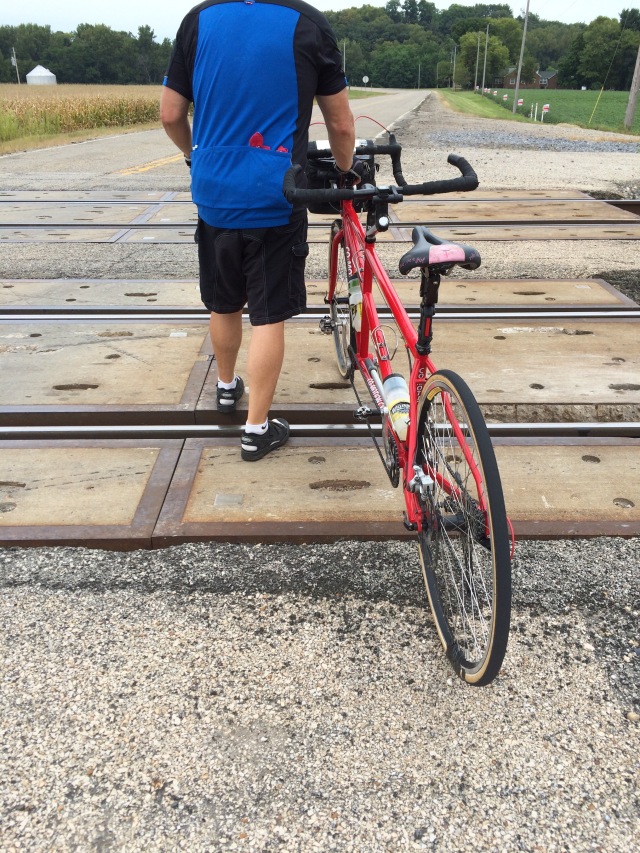 My crossing to bear.

14) Wrap Gorilla Tape To-Go around tire. This is a good time to consider how lucky you were to spec a rear disc brake on the tandem 10 years ago. You may have a paper-thin tire, but you still have two brakes.

15) Police your brass. Nobody likes a litterer.

17) Write Gorilla Tape a letter. Use this one as a template, or refer to the original, if you’d like.

While the bald rear tire of my tandem still holds air, I will tell you what a dandy duct-tape product you make. In the past, I used electrician’s tape to make emergency repairs to tires that shouldn’t have been repaired. Sometimes I even made it home. And while I will never again ride a tire that is so clearly suicidal, should I need to make such repairs in the future, they will be with your fine tape. I don’t know where you get your stickum, but it must be a magical place that no English sparrow can enter and survive.

Eight miles later, the tape is still in better condition than the original tread.

12 Responses to Filling a hole with money. Or, two-buck luck