Posted on January 29, 2018 by 16incheswestofpeoria

When one looks at one’s possessions and admits to oneself that it’s All Too Much to Bear, it’s time to clean house.

Some things are easier to pitch than others, but let’s not discuss electronics, computers or broken bird feeders. Instead let’s look at what really makes a house a home: the printed word.

Newspapers tucked here and there are pitched without a second thought. Magazines are nearly as easy to toss, that is, once you’ve safely set aside all your back issues of Wooden Boat, Bicycle Quarterly and Velo Vision.

Some of these volumes have traveled with me to at least a dozen apartments and houses over the years. They’ve been lifted, boxed, shifted, unboxed and placed on new shelves.

In other words I’ve had more opportunities to rid myself of them than I have fingers (and I have all my fingers).

Turns out the best way to cull the herd is quickly. Here’s a quick farewell to books I recently gave to another person who rides bicycles and, out of respect to the authors, a few of the reasons why I did so (spoiler alert: I haven’t been interested in racing as a spectator for a long time).

If you were new to racing in Illinois in the 1970s, most of your races were criteriums, short courses with lots of laps. I remember walking around Moline, Illinois, after racing in the rain when it finally occurred to me that spectators grouped around the corners to watch the crashes.

No. This book reminds the reader that “American cycling’s ancestral lineage is in track racing.”

Plus, for spectators, track racing is way more convenient than a criterium. You can see every crash without moving at all.

This is how racing was represented in America one year before the movie Breaking Away came out. Note to self: Don’t ever use contemporary as the title of a book. Time moves on.

Boy, does it move on. 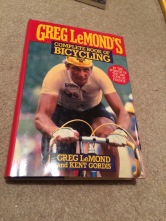 I’m not going to disrespect LeMond. His career speaks for itself. But this is another racing-focused book, and I’m decades past being racing focused. I may not be the only one.

A few words from the final page:

“Cycling, like any other sport in America, is a business, and as soon as the business of cycling no longer seems profitable, it might no longer be quite as ‘hot.’…”Of course, I sincerely hope that doesn’t happen. After all, I’ve dedicated ten years of my life to this grueling sport because I truly love it. And I think the next chapter of cycling’s history should belong to America.”

Turns out it did. And boy, was it dope.

The exodus included two books on Sean Kelly. At the risk of betraying my lack of attention, I’ll say this one has a lot of words with a small group of black and white photos.

I liked Kelly because I thought of him as a great soloist, bulling ahead when his team couldn’t keep up with him.

I flipped through a few pages and came across this description. Apparently, for Kelly, it was all about the bike:

“Kelly wasn’t a clever talker, he couldn’t be deemed physically handsome and he didn’t have the advantages of a formal education. Outside of the bike, there wasn’t much that Kelly could claim to excel at. His talent was for turning the pedals. He enjoyed the feeling of mastery when he turned them faster than everybody else.”

Thanks for waiting until page 78 to write that, David.

He is French. He won the Tour de France five times. His nickname is the Badger. He raced in Look pedals in 1985.

I raced in Look pedals.

And for the life of me, I don’t understand how you can set the cleat adjustment by riding with the cleat bolts a little loose (pg. 80-81).

Clearly a matter for another reader to ponder.

Good title. The book is actually divided into four seasons. I love a theme. Lots of good color photos, too.

Years ago I marked my place with the 1991 receipt from VeloNewsBooks: $19.95 for the paperback, $4 shipping.

Guess I was made of money back then.

Why did I keep this book for so long?

It’s a tall but slender hardcover and apparently written by its subject, a Dubliner who in 1987 won the Tour, the Giro d’Italia and the World Championship.

At one time, that was commonly known as a Pretty Good Season.

Plus, the book’s full of color pictures.

But the writing is functional at best, right down to the moth-eaten obbligato of whether there’s a place for the wife or girlfriend during the Tour. 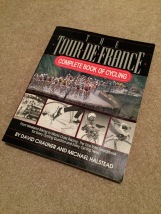 This book promises everything, and that’s before you get to the subtitle: From Weekend Biking to World-Class Racing: The One Total Sourcebook for Every Cycling Question and Every Cycling Need.

However, it doesn’t seem to answer the following questions:

Granted, I didn’t review the book line for line—maybe I missed something along the way. Still, I would expect a comprehensive book on cycling to rival the Oxford English Dictionary in size. At 235 pages, the Complete Book just doesn’t weigh enough. 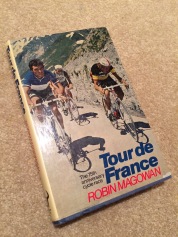 Another racing book. If I must choose between the Tour and Jules Verne—and I must, life is short—I’d rather spend five weeks in a balloon.

“They also have, like birth-control pills, dangerous side effects. Blood pressure goes up, liver rots, and the testes atrophy. But this is only in a small percentage of cases, and there is a school of sports medicine, in East Germany notably, that believes these can be prevented if intakes are continually monitored as to dosage.”

Is it too early to ask how that all turned out? 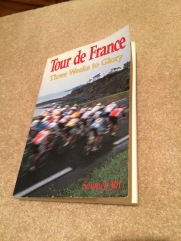 I’ll probably regret giving this one away. It’s well written and includes a scattering of historical images.

There’s also an interesting Q&A with Jacques Goddet, a Tour de France director for decades. Here’s one exchange from page 40:

Q: “Doesn’t the average person seem less attracted to the ideals of sacrifice and suffering that are so much a part of bicycle racing?”

A: “They want security. The whole world has become much more interested in security. There is so much misery in this world that everybody looks for peace and quiet, definitely.

“I’m not saying that personally I would like the riders to encounter huge difficulties, but it is necessary for the sport.” 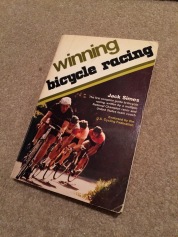 In America in the 1970s, bicycle racing was exotic to me. The best racers in the world didn’t come from this country. The huge six-day races of the 1930s were impossibly lost in the long ago. No American had yet competed in the Tour de France, and LeMond wouldn’t win his first Tour until 1986.

TV and newspaper mentions of racing were rare. So I read and reread books like this one. Simes was a good rider (three Olympic appearances) and coach, but he was an American, and his book provided little perspective on the world beyond the lower 48.

A quick look at the index reveals a mention of the Tour de France on page 99. Here’s the totality of that mention:

“Many stage races in this country involve only two or three events on a weekend, but the bigger international ones last several weeks and cover as much as a thousand miles in that time. The most famous bicycle race in the world, the Tour de France, is a three-week stage race for professionals.”