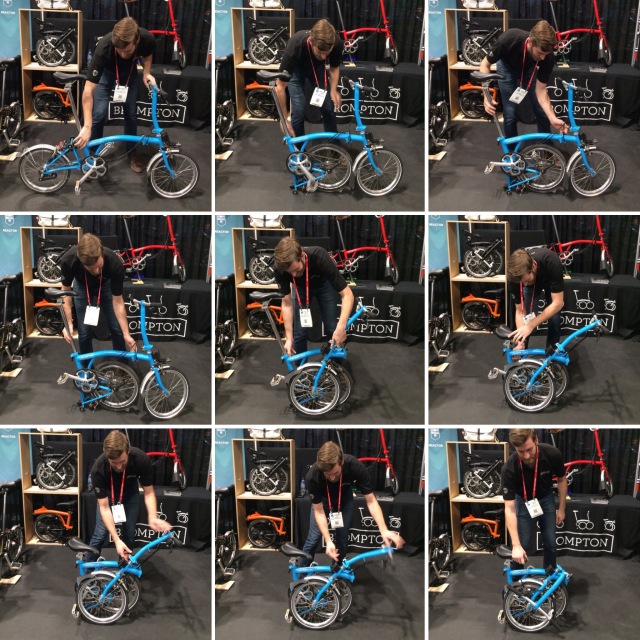 When I wrote about Peter from NYCeWheels in 2011, he worked for a specialty shop in New York City that sold folding bikes, electric bikes and folding electric bikes. In one of his first videos from 2010, he admitted he didn’t know what to expect from folding bikes. But he quickly found himself getting into it.

By the time he left the shop in 2016 he had written approximately 400 articles, produced 100 videos (capturing 8.7-million views), and spent two years as CEO. Now he heads up Brompton’s North American marketing operations.

You’ve been in the bicycle business how long?

I started selling Brompton through one of our larger dealers, called NYCeWheels, in 2010. So eight years in the bike industry, with the majority of those in retail.

I know the Brompton has gradually evolved since 1976, but it’s basically the same silhouette. What is it about the Brompton that attracted you?

For me, the Brompton merges my love of design and adventure. I was a road bike rider before getting into the business. Not racing, but doing long rides and touring. And so I came to New York with my father’s steel road bike. It was a Univega. 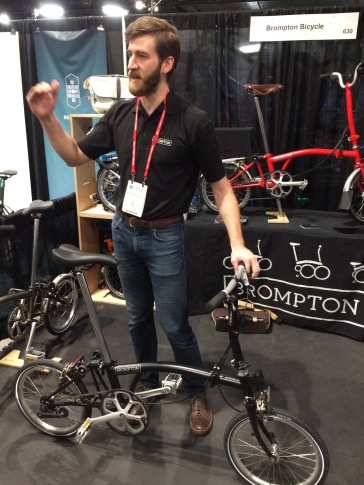 I couldn’t stick around to count, but it’s safe to say Peter folded and unfolded the Brompton hundreds of times during CABDA.

I had been doing lots of long rides going to and from school and out to Pennsylvania. When I started working at NYCeWheels, the Brompton immediately caught my eye with its raw lacquer finish, which showed off the steel construction and the handmade quality.

I’m sort of a sucker for design, and that drew me in. And then once I started riding the bike, I realized that this was something I could use in all the situations where a regular bike wouldn’t fit.

It allowed me to connect different parts of my life, like say, riding to meet friends and then taking a train home. Or riding somewhere, getting a drink at a bar and then maybe taking a cab. If I got a flat tire, I could throw it in the trunk of a car and transport it home that way.

And then I flew with the bike. I went to the UBI Bike School in Portland. The bike traveled in its own case and I rode from the airport to the school. That was a real treat.

Many people think of the Brompton as an urban bike. What’s your longest Brompton ride?

I rode a Brompton 150 miles over night from New York City to Philadelphia. I crossed the George Washington Bridge at 11 p.m., about an hour before it closed and bought maps at gas stations along the way. I made my way through all kinds of areas you would never expect to be in the middle of the night, like Newark, New Jersey. The reason I biked down there was because I was playing a jazz gig that night in Philadelphia. So my friend met me with the bass in Philadelphia.

There’s no rack for a bass on a Brompton.

There’s no rack for an upright bass currently on the market.

So what’s new with Brompton the company?

Our messaging in the U.S. and the focus here is going to become little bit more specific. We’re going to do a lot to support ideas beyond the bike made for cities. We’re going to be talking about the bike made for travel, for adventure, for leisure riding, that pops into your truck so you can travel to a beautiful park and go for a ride. So we’re changing the concept of what it is to be a Brompton owner in the U.S. a bit. Diversifying.

Peter gets a lot of mileage out of 16-inch wheels. He once rode from New York to Philadelphia on a Brompton.

And then there’s big news on the horizon with our electric bike, which will have a front hub motor with a torque sensor in the bottom bracket. It’s been a project in the works for many years.

The bike seems closer to reality now than ever. We have ridden prototypes in the New York office. There is absolutely production capacity in the new factory that Brompton has opened. They expect to be releasing those in Europe, for deposit holders in the U.K., come July, August, September. And then, hopefully, fingers crossed, we’ll have a model in the U.S. for 2019.

Now that you’re an insider, I assume you’ve gained new perspective on the company.

When I was being onboarded, I visited the factory and sat down with their head brazer. This guy’s name is Abdul. He’s been with the company since they started in 1976. He built the first production bikes with Andrew Ritchie, and he still trains every brazer to this day. So the heritage of quality and innovation has had this thread tied through it—the inventor and the original builder–since the very beginning.

What Bromptons do you ride?

My bikes are an M6L raw lacquer [the Philadelphia bike -ed.], and that was a gift given to me by the founder of NYCeWheels, Bert Cebular, after the first really good day of sales, so thanks, Bert. The other bike is an S2L, that’s titanium and has been modified so that the only thing that remains stock is the frame. Everything else is absolutely the craziest lightweight stuff you can imagine.

I first met you through your videos, really good stuff. What’s your secret?

This is key. A good bike video has to put you in the action. It shouldn’t be static. It should be always in motion. And it should give the viewer the feeling that they’re with you riding, as if you’re having a conversation out on a ride together.

Will we see you do videos for Brompton?