Taking a stand: A five-year-old gets his way

Posted on October 14, 2019 by 16incheswestofpeoria 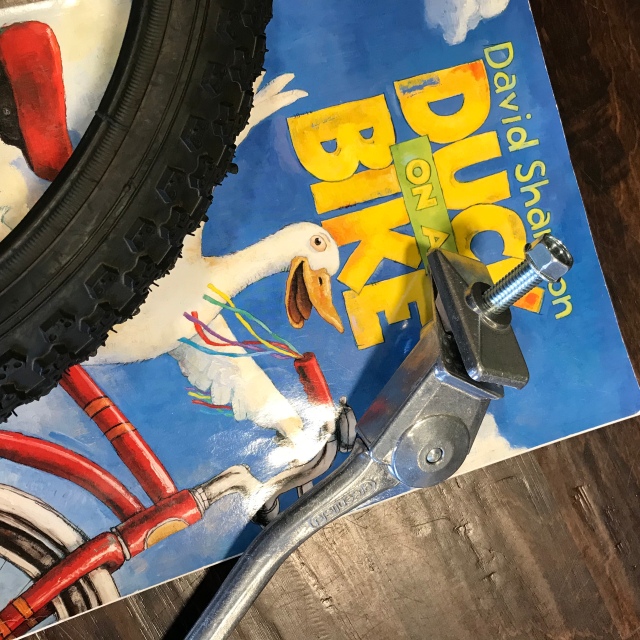 You hear a lot of stories at the bike shop.

The guy who, telling you why he’s buying a new, smart phone-connected helmet, includes in his story of a previous ride the phrase and when I came to. (Thoughtful.)

The gal who fixes her first flat tire 10 miles out on the trail by watching YouTube videos on her phone and calling the shop to double-check her research. (Thorough.)

The kids who decide to ride five times as far as they ever have and, on their successful journey to 100 miles in day, pedal along the interstate for thirty miles. (Naive confidence.)

And, of course, any story of mechanical mayhem that begins I was just riding along.

A five-year-old decided he wanted a kickstand on his bike. Maybe he had a kickstand and it failed; maybe he didn’t have a kickstand because he was just getting off training wheels—I didn’t hear that part of the story.

Anyway, he asked his dad to install a kickstand. And his dad promised he would.

Consider the relative nature of time.

The kid, too young to understand adult things like how important it is to cut back the lawn you encouraged to grow in the first place, may have understood time as an idle train blocking the crossing ahead for no good reason.

The kid can’t move forward, can’t move around the train. He must wait, and waiting for the hands of a million-pound clock to move from one position to the next is something for which he does not have time.

The dad, way older than the kid, somewhat taller and unaware of time’s passage, may have been overwhelmed by Saint-Exupéry’s matters of consequence.

The kid, unencumbered by school or job or missing keys, had a much simpler to-do list: get a kickstand.

One day the kid, tired of waiting for this simple, sensible upgrade, wheeled his bike in front of his parent, proudly pointing out the kickstand he had installed by himself.

Yes, the kickstand was backwards, but given the overall arc of the story, that’s a minor detail. No doubt the kid viewed the kickstand’s existence as more important than its immediate utility.

The kickstand may also have been loose and a little too long for the small bicycle. Again, I didn’t hear this part of the story, just guessing.

After all, a kickstand requires measurement and tailoring before installation.

Especially if the kickstand had recently held a much larger bicycle in place, the dad’s bike, for instance.

The dad found his bike leaning against the garage wall, just as the kid’s bike once leaned there.

And that’s how the dad came to update his to-do list.

We can only assume.

2 Responses to Taking a stand: A five-year-old gets his way