A brief history of how we got here: the speedometer

In the beginning, everything was slow. Everything here on Earth, that is. Comets traveled fast back then. Still do. And light traveled at about the same speed as it does today. But light comes from the Sun and that’s 93 million miles away, and that’s in space.

Up there. Not down here.

Here on terra firma, there was nothing more firma than terra in the old days. Unless a bit of that terra was less than firma and fell off a cliff.

Terminal velocity was always pretty fast. For a while.

But you never knew when something was going to fall off a cliff. Unless you pushed it. But even you knew how that would end.

After a while, things picked up. The arrow, for instance. The arrow was pretty cool. But it was the wheel when things really got rolling.

One of our founding fathers, Peter “Maverick” Mitchell, said it best when he said there is more to life than increasing its speed. There is also measuring that speed. (Might have been Gandhi who said that, but, really, how fast was Gandhi?)

All of which brings us to the recent past and one vital question:

How fast are you going on a bicycle when you’re going fast–and how do you tell? 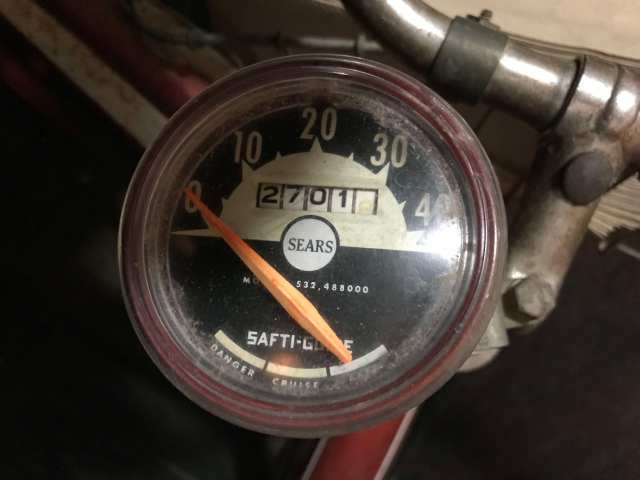 Before everything went all electronic-ky, there was the humble cable-driven speedometer. Down at the axle, a metal ring with two fingers stuck in the spokes propelled the cable through a right-angle gear. Up at the handlebars, the cable entered a small metal box sporting an analog dial and, usually, an odometer. Pretty simple, and yet–how did you choose among all the different models at your local Schwinn dealer?

(If you were on top of a lightweight racing bicycle in the late 1970s, drafting behind a barebones Ford Econoline and immune to the mechanical charms of on-bike instrumentation, you measured your progress toward 55 mph on the van’s speedometer, which you could see through the rear window, just past the driver’s arm.)

Electricity in the air

Bryan Allen had a battery-powered Erisman Pacemeter on board when he pedaled the Gossamer Condor airplane around a figure-8 course to win the Kremer prize in 1977. The Pacemeter had two analog dials–the second was a cadence monitor.

When Allen pedaled the Gossamer Albatross airplane across the English Channel in 1979, he lost track of speed when his batteries reached their expected lifespan two hours into the 2-hour-49-minute flight.* 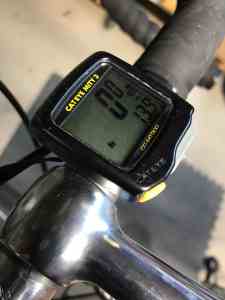 CatEye and Avocet released their bicycle computers in the 1980s. The relatively tiny CR2032 batteries in modern-day CatEye Urban Wireless and Padrone cyclocomputers keep going for a year or more. That’s perfect.

(Just remember, when it does come time to repower a wireless computer, you need two batteries, one in the head unit and one in the sensor near the wheel magnet.)

I used to have a CatEye on the handlebars of my single bikes, but when we got our first tandem in 1989, I moved the cyclocomputer to the back; given that most of my miles are on a bicycle for two, I haven’t spent much time since with a screen in front of me.

Even when I got a smart phone, I never had a handlebar holder for it. I’d start up the Strava app and stuff the phone in my back pocket. When I got back, I’d retrieve the phone, stop Strava and add weather information to the ride’s record. It was a great system that combined the inconvenience of waiting to see my speed with a dead battery. 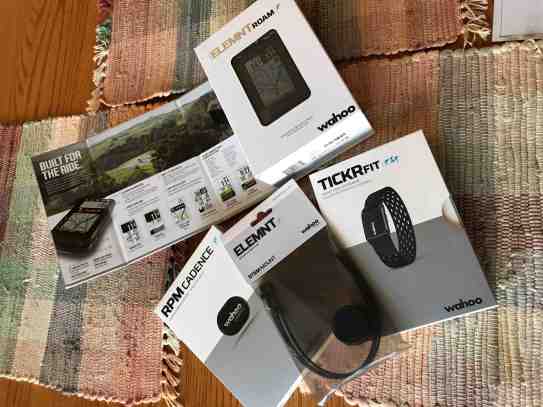 Of course by now you might have a separate GPS unit on the handlebars. Garmin, founded in 1989, launched the Forerunner 101 in 2003 and the Edge 205 in late 2005. In addition to speed and location, GPS-equipped riders can potentially monitor everything from pedaling cadence to power output in watts.

If all you need is speed and maybe distance, a GPS unit is overkill, especially when it comes to battery life. My new Wahoo Element Roam has a claimed battery life of 17 hours. A competitor, the Lezyne Mega XL, might ring up 48 hours.

So what’s the next big step in monitoring bicycle speed?

What’s next is simplicity.

Consider a speedometer that anyone can make at home–without a cable, without batteries, and, importantly for those on a budget, without incurring the expense of launching a network of satellites into medium-Earth orbit and maintaining equipment and personnel for a master control station, an alternate master control station, 11 command and control antennas, and 16 monitoring sites.

Consider the audio speedometer. What could be simpler? You don’t need the distraction of a screen. You need to keep your eyes on the road. Or the trail.

Or that squirrel over there.

By the way: squirrel! 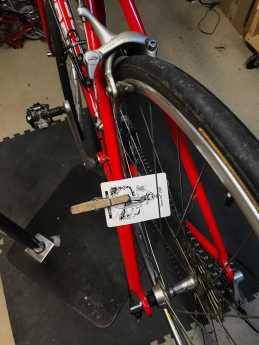 All you need is a playing card and a proper wooden clothespin with a spring. Attach it to the seat stay of your bicycle. Right side, left side–it doesn’t matter which side the card is on, only that it comes into contact with the spokes as the wheel turns.

Feel the need for a ride? You’re ready to go. Just listen to your speedometer.

The faster you go, the louder the sound.

What’s that sound? Why, that’s the sound of speed, my friend.

You gotta be flying.

1 Response to A brief history of how we got here: the speedometer