Pulling a Corvette out of the basement 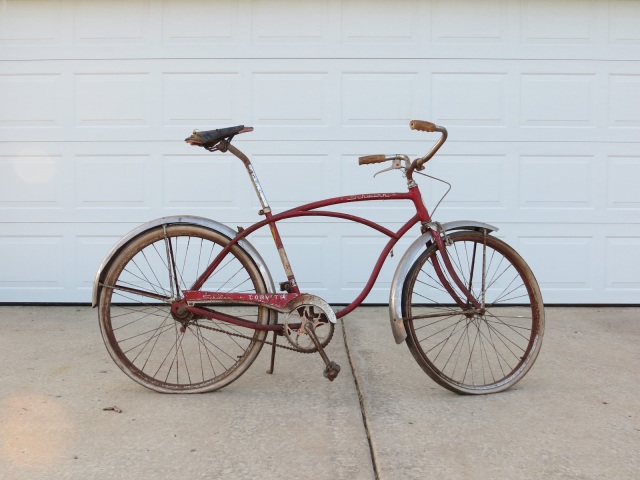 Maybe I should be more specific. It’s a Schwinn Corvette. According to the web, Schwinn made this middleweight model–in coaster brake, two-speed, three-speed and, for a short time, five-speed derailleur-equipped versions–between 1954 and 1964. Erik Reader found this one in the basement of a house he’s rehabbing on the near north side of Peoria, and decided the best way to release it back into the wild was to give it to me.

So it finally happened: a free Corvette. Let’s take a look.

The serial number on the left dropout, I think it’s G423990, indicates the frame was built on July 21, 1964. And the coaster brake reaction arm is stamped Bendix Automatic, which means this bicycle is a two-speed kickback.

Earlier Bendix two-speeds were actuated by a cable attached to what appeared to be a primitive brake lever. Pull the lever toward the handlebar for one gear; push the lever away from the bar for the other. As the one-time owner of such a device, all I’ll say is I’d love to get another someday. It works great.

A two-speed kickback is a different beastie. You shift it with your feet, no cable. Pedal away in one gear, and when you want to shift gears, pedal backward, not enough to engage the coaster brake, then start pedaling forward again. You’re in the other gear.

A kickback works well, but requires planning. You want to head for a stop sign in high gear, knowing that the bike will shift into low when you pedal all the way back for the brake.  When it comes time to accelerate away from the stop, you want to be in that low gear.

Peoria’s city boundaries, though not its population, have greatly expanded over the years.  And Illinois Cycle has followed the middle-class migration. This frame sticker lists two addresses for the business: 419 S.W. Adams, in the heart of downtown, and 3024 N. University at Forest Hill, 3.2 miles to the north. Illinois Cycle has long since consolidated into one storefront (at one time, there was also a Pekin store), which today is located at 9016 N. University, 8.7 miles north of the 1960s Adams location.

There’s an expression that began with horse riders: Rode hard and put up wet. It’s a hard way to treat a horse: ride it at full tilt for however long it takes you to reach your destination and thank it by ignoring its care afterward.

When I look at this steel horse, I’m not sure that it was rode hard, though it was certainly put up wet. The tread on the General Twin Trac whitewalls is near its original depth. The grips are unworn. The frame and fork are absolutely straight. The fenders have a dent or two, but they’re still firmly attached to the bike. Somebody thought enough of the bike to run a hub shiner. (Unfortunately, the shiner may have trapped moisture over the years, accelerating surface rust on part of the hub shell.) Most significantly, the chainguard still exists, and again, it’s perfectly straight.

With an old bicycle, you usually face one of two conditions: a fine patina or worse. This falls into the latter category. I imagine that the front wheel sat in this position for a couple of decades. You’ll notice the slightest bit of degradation in the braking surface.

So here’s my theory on why this bike seems to have such low mileage. The saddle clamp is missing. The BMX seatpost isn’t the real seatpost; somebody slid it over the 13/16-inch post that’s still in the frame. See where the real post necks down to 5/8-inch? It’s difficult to find a 5/8-inch saddle clamp. If somebody threw away the old clamp along with the old seat, that person may have parked the bike when the rotating full-length BMX seatpost cludge ended up making the replacement seat too high.

(I might also add that the Mongoose BMX bike the replacement seat came from–there’s a Mongoose graphic on the side of the Cionlli-made saddle–had a pretty hard life on its own. The shiny part of the seatpost was protected against oxidation while inside the Mongoose’s frame. Which means the upper part of the post was rusty long before it met the Schwinn Corvette.)

So, there you go: a project for next winter. Between now and then, I’ll be thinking about how much of a ratrod I want this renovation to be.

The wheels are Schwinn’s unique 26×1-3/4 S7 size; I might build a different size wheel just to have better tire options, keeping in mind that a smaller diameter rim might throw off the angle of the kickstand and also make the front brake even more useless than it is right now. And I’ll have to do some painting, but do I want to do a good enough job to justify a new set of decals?

What do you think?

8 Responses to Pulling a Corvette out of the basement